BRAZIL striker Richarlison has claimed he plans to ‘buy an island’ and live there with a ‘group of women’ when he retires from football.

And he is expected to start the opener against Serbia on Thursday.

Yet, despite the enormous pressure on him to become Brazil’s first-choice striker, he is calm and relaxed in Qatar.

And he produced a hilarious response when asked about his plans once he hung up his boots – claiming he was inspired by the legendary Ronaldinho.

He was asked, “Do you have any idea what you’ll be doing in retirement?” 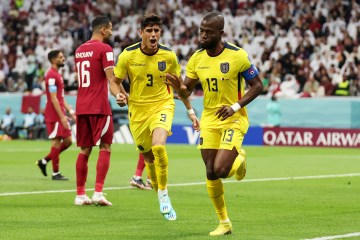 To which he replied: “I’m going to buy an island and stay there with a group of women, just like this picture of Ronaldinho.”

Another added: “I think you can only get by if you are Brazilian 😅.”

Ronaldinho was known for his party lifestyle during his playing career and continued to maintain that perception when he retired.

The 2005 Ballon d’Or winner disappeared from the top tier by the time he turned 30 as his lifestyle caught up with him.

But Richarlison still has some way to go if he wants to make a similar impact on the Brazil national team.

Ronaldinho scored 33 goals in 97 games for his country and was instrumental in their 2002 World Cup victory.

Former Everton man Richarlison scored 17 goals in 33 appearances for Brazil but is only now ready to embark on his maiden World Cup campaign.