Vice President William Ruto offered the women of Mathira, Nyeri County, Ksh 500,000 after being impressed by their dress code.

The women wore yellow dresses and green ties depicting the colors of the United Democratic Alliance (UDA), a gesture that impressed the vice president who was touring the region on Saturday, December 4.

DP Ruto poured the money on women and pledged to work with such groups to empower millions of women and, by extension, families and communities across Kenya when he was elected President in 2022.

“I admire the spirit and tenacity that I see in the Konyu women’s groups in Mathira constituency and across the country. I recognize this spirit, this desire to make tomorrow a better day financially, because it is is the scam spirit, ”said the DP.

Ruto, who spoke at a fundraiser in Mathira, also distributed an additional 1.5 million Ksh for the women’s groups and 500,000 Ksh for the boda boda runners who attended.

During his tour of Nyeri County, Ruto promised to take into account the Big Four program launched by President Uhuru Kenyatta if he is elected head of state on August 9, 2022.

“We will give 100 billion Ksh for housing and added value for young people. They are our children. We took them to school, if we don’t plan their jobs, who will? He asked.

The DP has said he will keep the promises made by the Jubilee administration even if President Kenyatta retires. He also claimed he would revive the Big Four Projects which were at a standstill.

“I am ready to take the country to the next level by relaunching key programs and projects that were at a standstill, including the Big Four program,” Ruto said.

Earlier, Kieni MP Kanini Kega felt that the vice president’s team were surprised by the warm welcome ODM leader Raila Odinga received in Nyeri last week and that is why he returned to the region to solicit votes.

Kega claimed that DP allies in Mount Kenya have now planned his tour to Nyeri to counter the gains made by the former prime minister.

“Ruto thought he had votes on Mount Kenya in his pocket. After Raila’s trip to Nyeri, he realized that he still had to convince voters why they should elect him president, ”Kega noted.

“The Nyeri have shown a lot of love to Raila, and they are gradually embracing his Azimio La Umoja philosophy. We are happy with it.

The lawmaker said the DP was free to travel to any part of the country to sell his ideologies, but urged him to adopt a measured tone when speaking about President Uhuru Kenyatta. 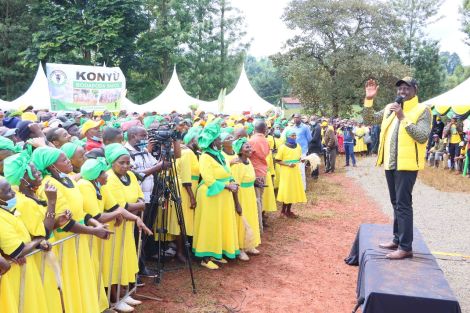